Why Hashtags Are Important in Social Media Marketing (2020 & Beyond) 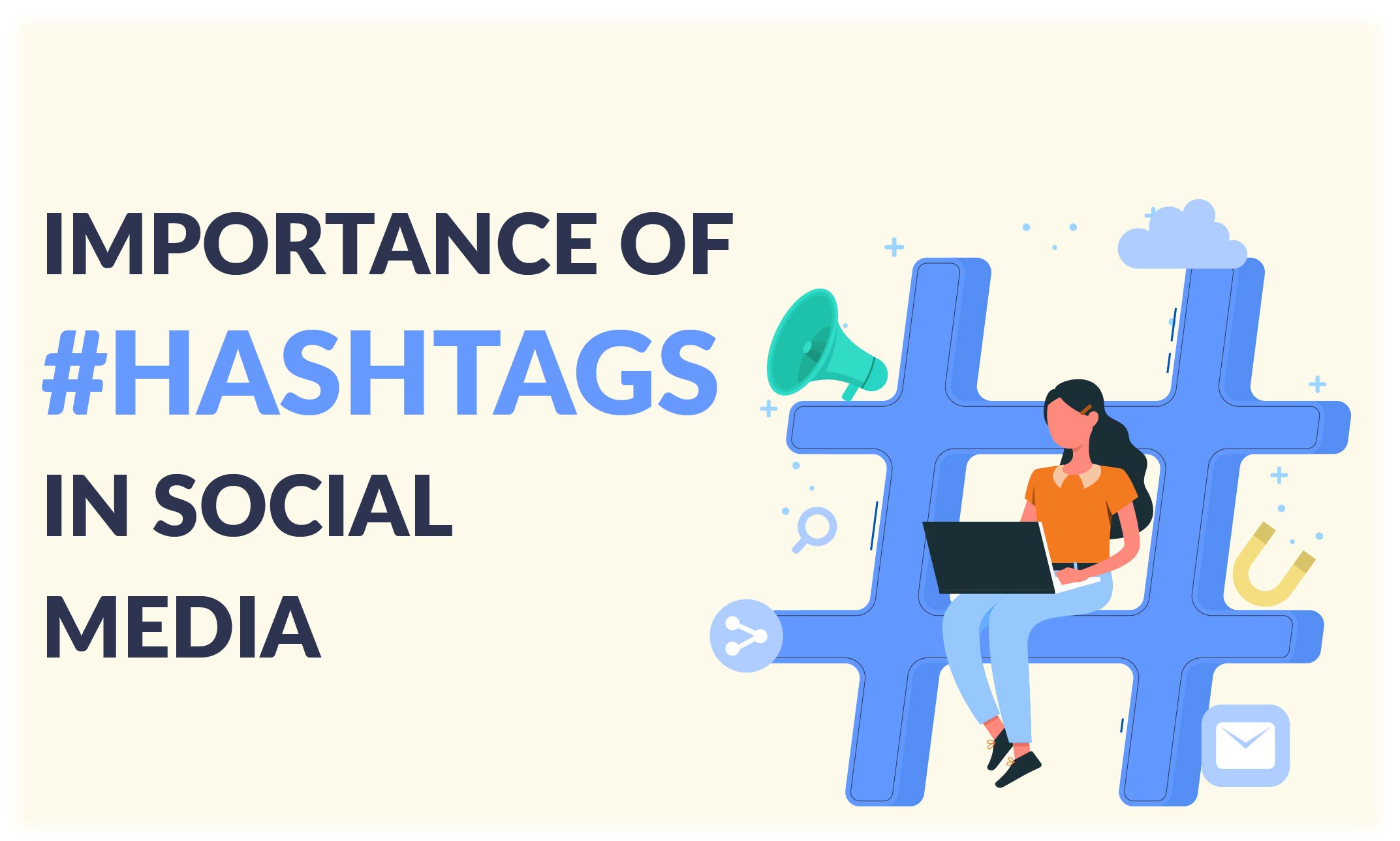 We've all seen these, we've all wondered what exactly the point of hashtags is, and we've all forgotten at some point or never found out.

Search or Tap on any conversation topic starting with a Hashtag and all content mentioning it is organized and shown, but what role does this play in Social Media Marketing and isn't this just for Twitter Wars?

To answer, we'll need to dive into the past, present, and future for how this function was, is and will be used by Marketers as a tool to enhance their brands' online presences and reach.

On August 23rd in 2007, Chris Messina used the first Hashtag on Twitter to ask whether they seemed like an appropriate option for differentiating between topics.

how do you feel about using # (pound) for groups. As in #barcamp [msg]?

13 Years Later, they seem like the only option that ever existed.

Twitter integrated this function into the platform officially in the coming months, and after that, every social media platform has taken up this feature without hesitation.

Facebook, Instagram, and LinkedIn all serve slightly different features related to the hashtag function and cumulatively account for millions of posts. At the same time, Twitter individually shows an average of >125 Million Hashtags used daily.

Social Media Platforms are constantly fighting to become their users' most preferred place to spend time, and in this battle of attention, it's necessary to save each reader's time where possible.

Users of all platforms scroll through their feeds almost every day, looking for things that are interesting for them while the average time spent on each post decreases over time.

Scrolling through News Feeds, users are attracted to certain types of content that speaks to them as individuals, or that they were specifically searching for, and that is where brands can simply place their content alongside any Hashtag.

Still, there are a few guidelines that are considered best practices for hashtags:

This can involve researching existing trends on Twitter and Instagram, using a tool like Socialert. Or, you could measure the performance of your own Tweets and monitor Hashtags, using a tool like SocialBu. This tool will also collect and organize all Tweets mentioning specified hashtags in the Social Feed, for easy access and interactions in real-time. 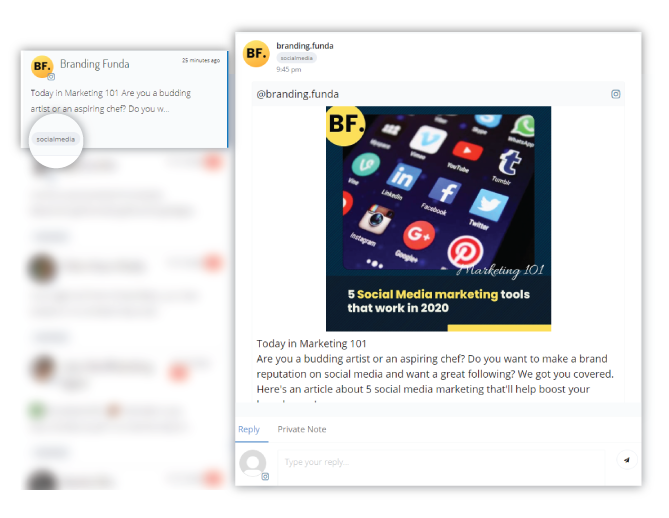 For Twitter, Hashtags have always been associated with their core purpose of discussions within threads as any person can look up news or conversations regarding their topic of interest, to jump into the conversation. 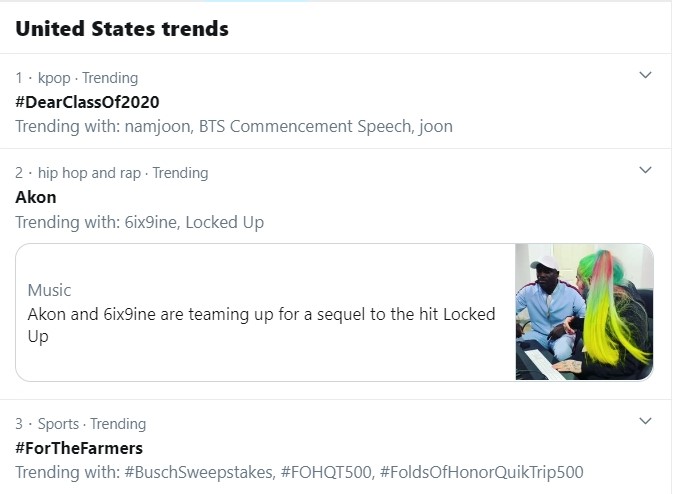 Every day, such a selection of topics is shown to Twitter users for easy access to conversations and information regarding them.

More importantly, the interaction between random users on a mutual topic is much more prominent and encouraged on Twitter than it is on other platforms. Such discourse gives room for brands on Twitter to do the same and be conversational with their audiences.

Wendy's is one brand that's at the top of the Twitter game by consistently posting informal, authentic, and playful banter in their Tweets. For such a unique social media presence, they've been the subject of immense admiration from news sites and social media users.

Leveraging this style even further, they created a specific event and Hashtag that celebrated this behaviour by offering the opportunity to ask Wendy's for a 'roast'. Ironically, insulting their audiences is one thing all brands actively steer away from, but it's the exact thing that sets Wendy's apart.

Our Twitter fingers have been getting itchy. How’s Friday lookin’?
#NationalRoastDay pic.twitter.com/kbObXaRd9x

On this day, thousands of Brands and Users are tweeting with this Hashtag for a chance at interacting with Wendy's (to be jokingly insulted). So, offers and promotions are also simultaneously launched in-store to convert all this Social Media attention into revenue.

Such Hashtags executed entirely organically and being in line with the brand's values are illustrations for all businesses on how to best use Hashtags to boost their Social Media Marketing campaigns.

Considering the platform provided by Instagram is primarily visual, Hashtags make a significant impact as they aren't lost in a sea of multiple, short (Tweets) or extended (LinkedIn) text-based posts. 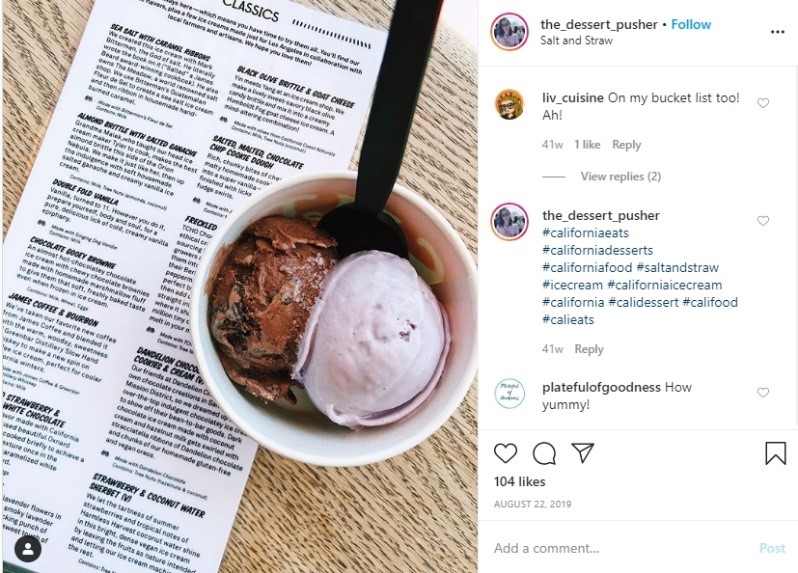 In this example, we see how using various hashtags containing cities, landmarks, or areas are used to target users in that same locality. By using California in different types of tags related to their product, the business aims to get in front of any customer that is looking for dessert within that area and can visit them.

Being specific is helpful because targeting a general hashtag, such as #Food, will lead to your content being pushed down by numerous, competing posts very quickly.

This will have your content end up in front of users that might not be remotely close to your business. On the other hand, using one such as #CaliDessert that has a few results will ensure yours remains on top for a significant period.

But if yours is an online business with no specific location but a particular customer base that would be annoyed by seeing an abundance of hashtags, there is a solution:

Since hashtags are generally most potent within the post's first hour online, you can always add all of them to one comment (like the example above) so that the post remains clutter-free while the associated benefits are also gained.

With Instagram Stories, Hashtags are crucial for the same reason of reduced competition as Stories only last for one day and it's unlikely there's much competition on the day you post.

Even if there is, Stories follow a different method of sorting and if you post early in the day, you'll appear first when users tap on that Hashtag's Stories.

Role of Hashtags in Trend-Jacking

While the addition of hashtags regarding a currently 'hot' topic can get you quite a reach on Social Media, it does lead to backlash if done in-authentically.

Trend-jacking is doing precisely that, for the sole purpose of getting your company into the news and getting maximum views, regardless of whether your regular brand messaging aligns with the current situation.

For the Black Lives Matter Movement and the protests surrounding the death of George Floyd, media coverage was essential to get the voices of advocates heard by those in government.

Brands took up all the social media attention surrounding this issue as a go-ahead to put up the #BlackLivesMatter next to their posts to leverage this attention into CSR and goodwill for themselves.

In the case of the NFL, there had already been a history of disregard for this movement, and once they came out with their Instagram Posts including their own #InspireChange in support of the protests, they received immediate criticism. 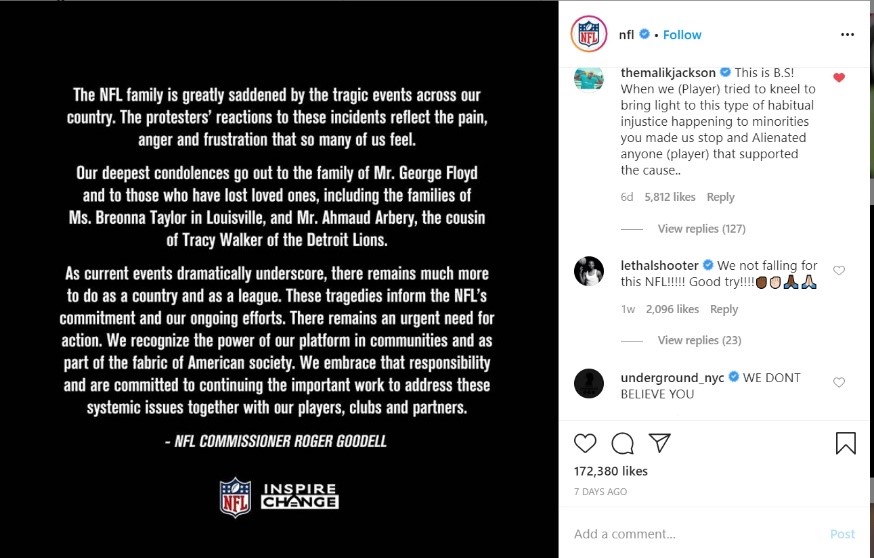 That resistance was due to the blatant disconnect with the previous actions of the brand and the issue they were allegedly supporting.

This was boosted by the fact that it took them ten days to say anything after the root incident and even this statement was invoked by players putting out a statement on the League's behalf.

Accordingly, people began to attack the NFL for this hypocrisy and started a boycott movement (ironically, also using a hashtag) that caused the brand to pivot from statements into re-sharing quotes, a more straightforward option that meant less liability.

Hence, instead of laying a strong foundation for a recurring set of posts and user-generated content that would mention the hashtag #InspireChange, all they managed to do was invoke the anger of the community.

This case shows us precisely how brands need to be respectful, authentic, and sensitive about issues before jumping onto the Social Media Bandwagon with their hashtags.

Now that you've read multiple examples that show the Do's and Do Not's of using Hashtags on Social Media, you have a chance to do better.

Remember to do your research by looking at the current and previous best performing Hashtags before thinking of your own.

Then, try your best to keep them: Organic, Simple, Memorable, Sensible, and Authentic to your brand's values.

Stay true to each of these qualities and users will start to use your Hashtags so that your attempts to use them in Social Media Marketing will bear fruit!

Written by Abdul Basit Humayun
I am who I'm meant to be, this is me.